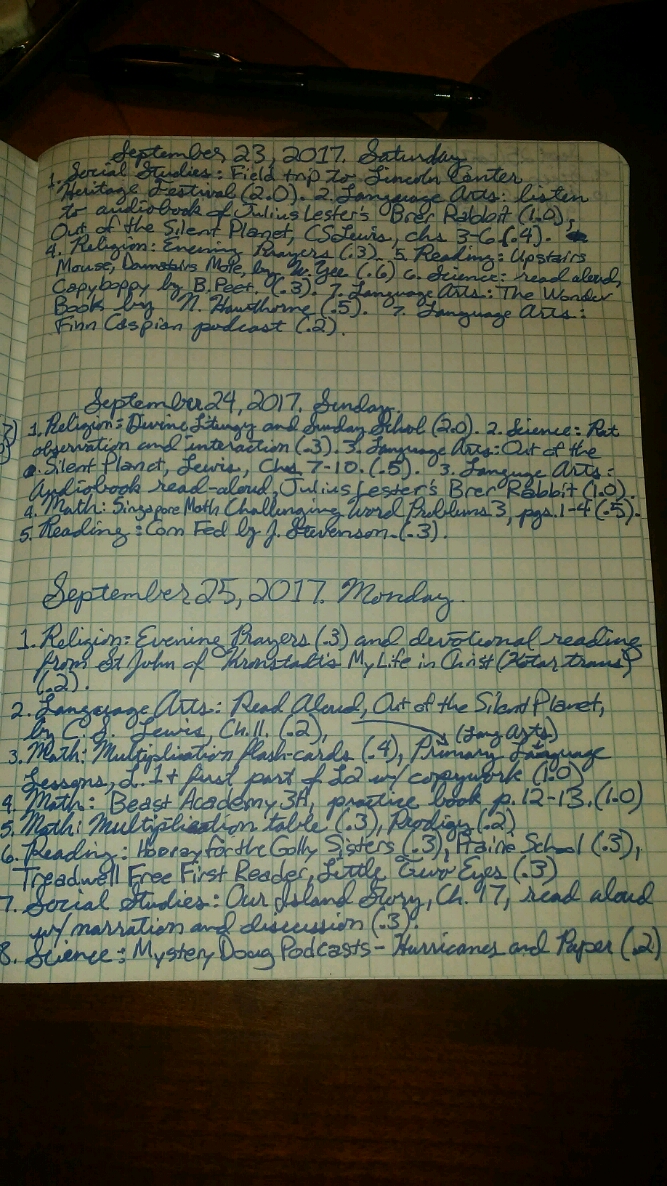 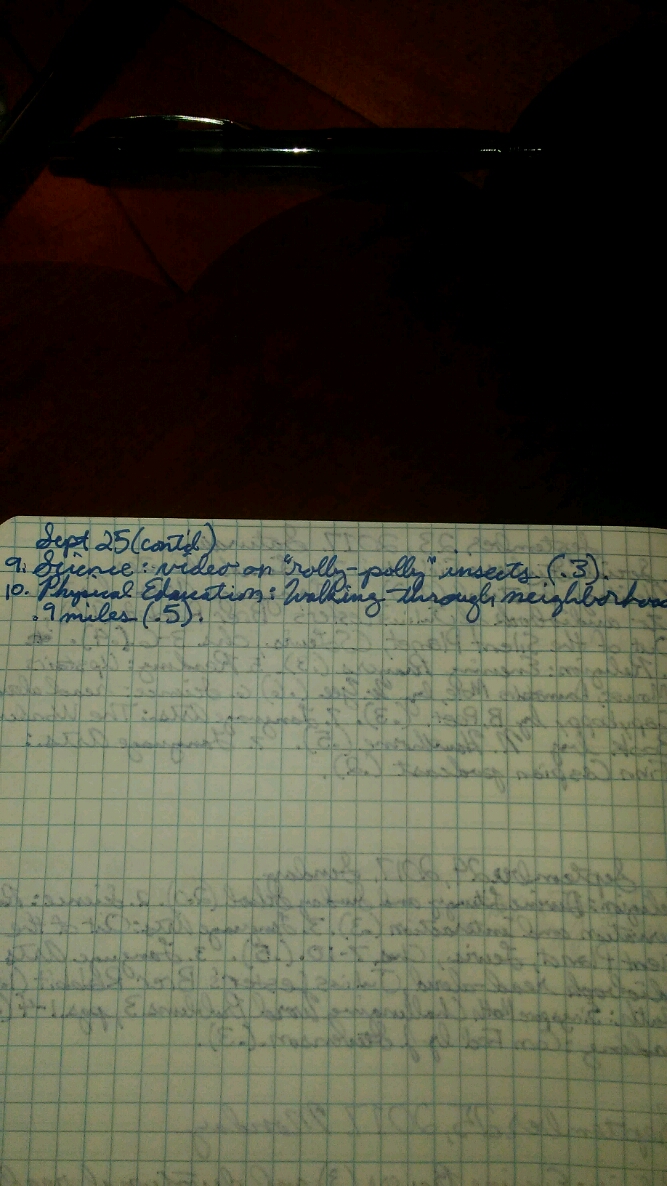 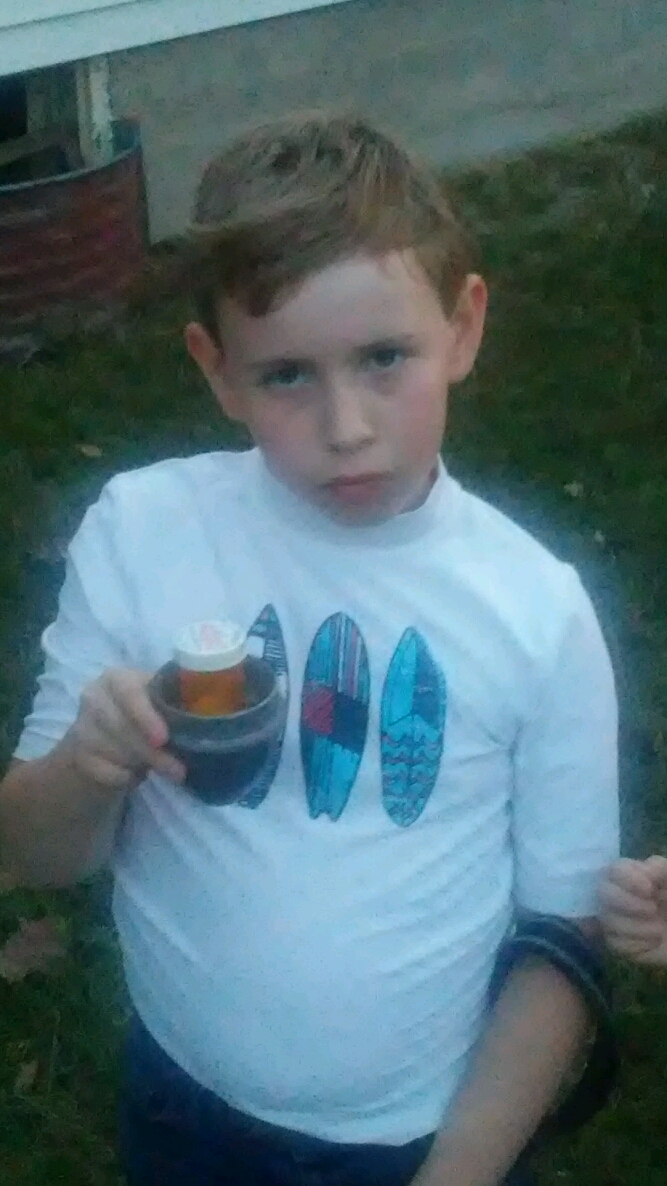 Robo-boy loves everything related to technology, and so we found a good way to integrate learning about geography, outdoor physical activity, as well as familiarisation with the new neighborhood, with technology: geocaching!

We give Robby the phone and he tells us where to go! We discuss the cardinal directions, satellite positioning, and local geography. He loves it. We even found a "trackable" knickknack that we scanned into the application and discovered it had found its way into Missouri from Utah.

For some reason, I'm drawn back to the idea of getting into LiveJournal again. I don't know why? Convenience of thought expression? My burgeoning interest in Russian language?

I feel like it might help me to document more of our homeschooling efforts, and might serve as another way to connect to Orthodox English-speaking people, as well.

I don't want to live an unexamined life. I'm taking courage from the example of Fr. Daniil Sysoev, now a hieromartyr, who himself also possessed a livejournal.

“It was during this part that the majority of us tried to kill ourselves.”

They buried my spiritual father last November. I have never seen a body in a casket look so not-there; the indistinct pale husk he left behind looked like something a breeze could lift up and carry away. It was the contrast, I suppose. Few people in life are as radiant and vigorous as Fr. George Calciu, or as full of joy. He was a few days short of his 81st birthday, still full-time pastor of a church in the Washington, D.C. suburbs, still traveling world-wide to those who sought him as a teacher and spiritual father, still diligently reaching out to the poor and unchurched around him.

Fr. George’s radiance was a lasting rebuke to the darkest intentions of torturers. In his native Romania he was imprisoned twice by the Communist authorities, for a total of 21 years. He was a survivor, in particular, of the brief but appalling “Pitesti Experiment”—the most intensive program of brainwashing to take place behind the Iron Curtain.

Summer is here, we have our new (to us) car, law school is 1/3rd finished, and we are in the thick of the Apostles' Fast.  Today we went strawberry picking at Boughton Farm, about 15 minutes away from our home, and we were inspired to take some pictures of our 12-pound harvest.  Actually picking the strawberries was a new experience for me-- Arlie tried to make that a big deal, like somehow I had missed out on life.  It was fun, although it involved crouching down or bending over most of the time.

The fast itself is going pretty well for us, although it seems that, at least in my local community, this fast is kept far less strictly than Lent or the Advent fast.  Our older friend Cindy said as much when we had her over to talk about us hosting a Pampered Chef party.  I think we pretty much agreed that she would demo recipes that were fasting, or at least didn't have any meat.

Our last day of property was filled with hilarity, as several people in the class participated in Prof. Lee's end-of-semester poetry contest.  The class session before he had told us what he was looking for-- material that really "captured the essence" of Property II.  He gave a previous year's example of a Haiku, which the student had introduced by way of saying, "In honor of Prof. Lee's heritage..."  which he explained was not a cool thing to do since Haikus are Japanese and Lee's ancestry is Chinese (woops!).

I didn't participate, but the people that did were GREAT.  There were the traditional ones-- limmericks, sonnets, freeform.  One began his by saying, "In honor of Prof. Lee's heritage...just kidding."  Clayton, the guy in my class that I can only describe with the words "punk rock" to demonstrate the level of coolness and his personality, gave a free-form performance piece that had the class rolling on the floor.  The real highlight from his piece wasn't really related to property, but lawschool in general: "If Section 1 had a mother, she would be SO ugly."  (we're Section 2... and collectively there is some good-spirited rivalry).  So many of these people were REAL performers.  It was amazing to see these people, having known them in an academic context for a year now, to really break out and reveal some of their personality as they entertained us with jokes only people who had taken Property II would get.  One guy, a real smart alecky type of fellow, had a two line poem:

What's mine is mine,
unless it isn't.

ARGH.  That didn't get a favorable reaction from the class... we're usually very straightforward with our appreciation or disapproval and this was no exception.

But it was GREAT and Prof. Lee had a poem of his own to give that was really funny and moving at the same time.

For some reason I am overcome this morning by a sense of purpose and meaning to my life, even my problems. Someone must be praying for me.

I'm on a really strange sleep schedule that sort of involves a few hours during the day and a few hours in the early morning. So far, so good. I took some time from studying to write a brief OrthodoxWikipedia article for my heavenly patron, St. Isaac the Confessor.  The community there has already formatted it so that it looks really good.  I plan on expanding it this summer when I can do more research, so as to include stuff about his role as the patron of the Romanov dynasty, and stuff about the enormous temple dedicated to him in St. Petersburg.  I'd really like to know where his relics are, too.  Writing the article put me in mind of my namesday (May 30) and got me thinking about what plans I should make to fittingly honor St. Isaac on that day... possibly more on that later.

Time to get ready for class... CHRIST IS RISEN!

This law school thing isn't for those who are too attached to the warmth and comfort of their beds. The last several days have been... interesting. I had my oral appellate argument yesterday at the Ohio ninth district court of appeals in front of my group instructor (a clerk for that court) and two of her lawyer friends. Let me just tell you that it went so much better than I thought it would. Some sort of calm came over me in the heat of battle. For those who don't know (I certainly didn't), giving an appellate argument isn't like the Perry Mason trial stuff you see on TV. It's more of a conversation with the panel of judges. As you go into the main points of the brief that you filed with the court, they interrupt you (and then, my friend, you must SHUT UP) and ask you stuff that you HAVE to be ready for ("so what exactly is the standard of review on this issue?" "when was that case decided?" "How do you distinguish the case at bar from this precedent?").

For some reason, I knew all their questions, delivering my argument in the best way I could and using the oral argument techniques we had learned in class. At one point, my opponent didn't know the facts in a certain case (and neither did the judges-- hahaha) so in rebuttal I wowed them with a brief recitation of the facts of that case and how really its argument coincided with the argument I was making for my client. Really, to have done so much drudgery all year long, and to have done SO much research and writing on this particular case all semester, we were finally given a little taste of the FUN stuff that lawyers get to do. The "judges" had nothing but good things to say about me in their critique, which, I told my opponent, probably meant that I was doomed! But really, it was great. I hadn't slept (and really, still haven't) but I was euphoric.

The celebration was short-lived. Last night I had to write up a four-page argument for a roleplaying scencario in criminal law, analyzing issues of "attempt" crimes from both common law and Model Penal Code rules. Four pages isn't much, but before I started I had to read about 40 pages in my crimlaw book all about it, so it was time consuming. But really I got like three hours sleep this morning, and its either that or adrenaline or the red bulls I'm drinking, but I'm not feeling tired. That's a good thing, too, because I have three classes today.

As my friend Maryellen just put it, "Law school is no joke."

Snowpup's most recently discovered talent is being able to find spiders-- on the ceiling, hanging from the ceiling, or crawling on the wall.  His little puppy eyes are geared to movement, I suppose.  This is one reason I don't like living in an old house-- I see at least one spider a week.  I used to be afraid of them, now they're mostly angering.  I hate feeling that way about one of God's creations, but if you're a spider in my house, it's the death sentence for you.

Snowy also has developed an annoying habit of trying to speak to you when you refuse to make eye-contact with him.  He'll sit there slowly opening and closing his mouth, at first only "huffing" and "puffing"... then if you still don't look at him he progresses to audible barks, louder and louder as much as he thinks he can get away with.  I tell him no, but if he persists I have to correct him...  it's hard sometimes.  He's so cute, and his little barks have this terminal "F" sound which is really funny, like "Bfffffffffff!"  Oh pup!

It occurred to me the other day that he's a ten-month-old now.  He still lets me hold him however I please-- on his back, for instance.  Sorry for the randomness.  Now onto pressing work that must be done by 10:30 tomorrow morning!!!